Figure R. Numbers of deaths attributable to PM2.5 in 2019. Hover or tap to explore the data. 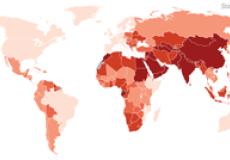 Long-term exposure to PM2.5 contributed to more than 4 million deaths in 2019. 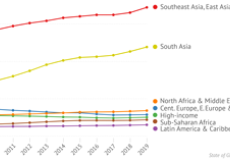 Asia and Africa see the highest burden of disease from PM2.5. 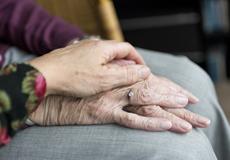 Even as exposures level off, the burden of disease rises as populations grow and age.

See how PM2.5 levels vary around the world.

Long-term exposure to PM2.5 contributed to more than 4 million deaths in 2019.

Among 69 risk factors that are considered to be potentially modifiable, ambient PM2.5 ranks 6th behind high blood pressure, smoking, and high blood sugar, among others. It is the leading risk factor among all environmental and occupational risks.

Asia and Africa see the highest burden of disease from PM2.5.

The burden is rising fastest in Asia. Over the past decade, South Asia and Southeast Asia, East Asia, and Oceania saw steep increases in total deaths attributable to PM2.5. More modest increases were seen in sub-Saharan Africa and in North Africa and the Middle East. Together, the increases in these regions vastly outweigh the modest decreases in the High-Income and the Central Europe, Eastern Europe, and Central Asia Regions.

Figure S. Trends in total deaths attributable to PM2.5 globally and in the GBD Super Regions. Hover or tap to explore the data.

Sixteen of the 20 most populous countries experienced increases in PM2.5-attributable deaths over the past decade.

Figure T. Change in total deaths attributable to PM2.5 in the 20 most populous countries. Toggle to switch estimates.

Even as exposures level off or decline, the burden of disease rises as populations grow and age.

Overall, changes in population size and age structure sometimes have the largest impacts on these trends. Even if exposures to air pollution are decreasing, the overall attributable burden of disease can increase if a population is growing faster than exposures are falling. By the same token, a population that is aging will likely face a higher burden of disease because older people are more vulnerable to diseases linked with air pollution.

Together, population growth and aging of the global population are estimated to account for more than half of the increased deaths attributed to PM2.5 exposure over the past decade.