Ozone exposure accounts for 1 out of every 9 deaths from COPD globally.

Figure U. Numbers of deaths attributable to ozone in 2019. Hover or tap to explore the data.

Long-term exposure to ground-level ozone is associated with the development of chronic obstructive pulmonary disease (COPD), a progressive and debilitating disease that makes it harder to breathe. We analyze the burden of disease attributable to ozone based on its contribution to death and disability from COPD. 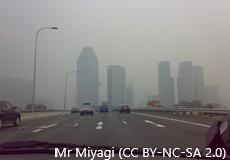 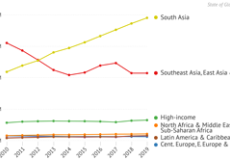 Deaths from ozone-attributable COPD are rising despite declines in mortality rates. 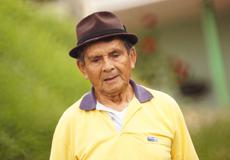 See how ozone levels vary around the world.

Deaths from ozone-attributable COPD are rising despite declines in mortality rates.

Global mortality rates from COPD attributable to ozone have declined by nearly 13% (95% UI: -20.3 to -4.9) over the past decade. However, the overall number of associated deaths increased by 16% (95% UI: 5.8 to 26.7). This difference is largely explained by changing sociodemographic factors, in particular the aging of populations.

Fifteen of the 20 most populous countries experienced increases in ozone-attributable deaths over the past decade. The largest proportional increases were seen in Brazil (which saw a 191% increase in ozone-attributable deaths), Ethiopia (171%), the Democratic Republic of the Congo (97%), and Indonesia (89%). Given that these countries experienced only small increases in ozone exposure during the same time period, and COPD mortality rates have been largely stagnant over this time period, the increases largely reflect the growing numbers of older adults in the population.

Figure W. Change in total deaths attributable to ozone in the 20 most populous countries. Toggle to switch estimates.

COPD typically takes many years to develop as a result of long-term exposure to ozone and other irritants. As a result, it takes its toll primarily in older adults. The health burden of ozone-attributable COPD is rising in countries with aging populations.

The growth and aging of populations accounts for much of the increase in COPD-related deaths in countries across Asia. Because of these countries’ large populations, these trends in turn strongly influence the overall global increase in the number of ozone-attributable deaths from COPD.