Figure O. Numbers of deaths attributable to total air pollution in 2019. Hover or tap to explore the data.

A High Burden of Disease

Exposure to air pollution has serious health consequences. We use a rigorous process to assess the burden of disease from major air pollutants in terms of the deaths and years of healthy life lost borne by populations as a whole in every country of the globe and how these impacts have changed over time. 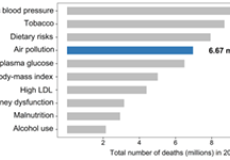 Air pollution is a leading risk factor that contributes to millions of deaths each year. 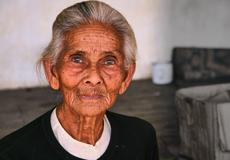 Air pollution increases the risk of illness and death from several major diseases. 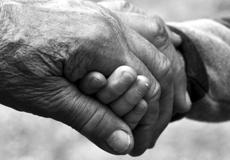 Children and the elderly are most acutely affected.

See how pollution levels vary around the world.

Air pollution is a leading risk factor that contributes to millions of deaths each year.

In 2019, air pollution was the 4th leading risk factor for death globally. Its total impact is exceeded only by high blood pressure, dietary risks, and tobacco use. Every year, more people die as a result of air pollution exposure than die from traffic collisions worldwide, a number estimated at 1.28 million in 2019. Its impacts also exceed those of other widely recognized risk factors for chronic disease such as being overweight (high body-mass index), having high cholesterol, and malnutrition. 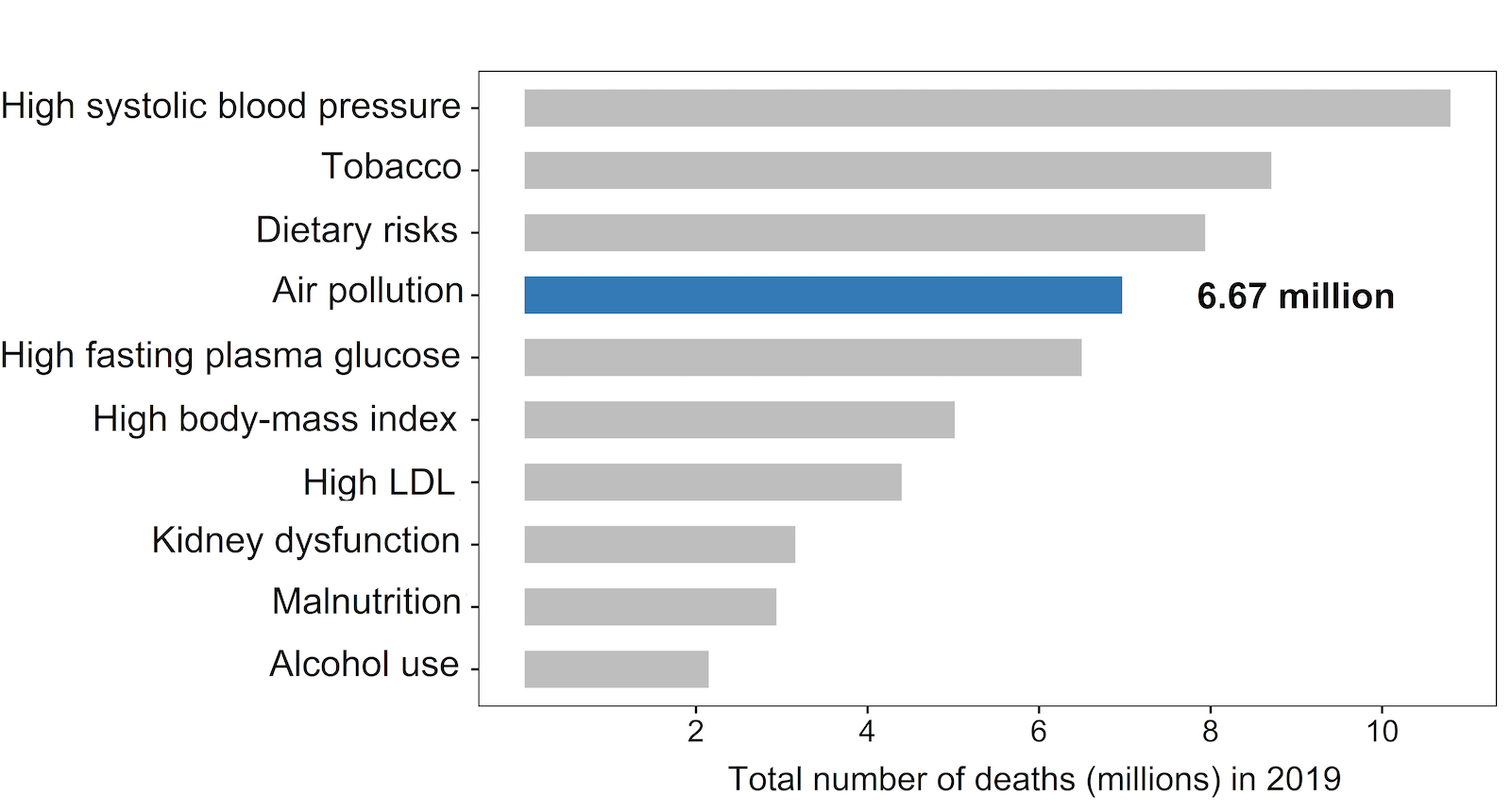 Figure N. Global ranking of risk factors by total deaths from all causes in 2019.

Air pollution increases the risk of illness and death from several major diseases.

An extensive body of scientific evidence shows that breathing polluted air over a long period of time contributes to an increased risk of illness and death. Key health problems associated with air pollution include ischemic heart disease, lung cancer, chronic obstructive pulmonary disease (COPD), lower-respiratory infections (such as pneumonia), stroke, type 2 diabetes, and a range of neonatal diseases related primarily to low birth weight and preterm birth. Ongoing studies continue to explore air pollution’s role in the development of additional conditions including asthma, cognitive disorders, and other effects, but these are not currently included in the Global Burden of Disease (GBD) estimates.

Figure P. Percentage of global deaths from specific causes attributable to total air pollution. Use the data app to view and download cause-specific data for your country.

Air pollution’s contribution to disease is not borne equally across the world. For example, while air pollution accounts for about 20% of deaths from ischemic heart disease globally, this ranges from 5% in higher income regions of the world to over 30% in the sub-Saharan Africa and South Asia regions. These variations reflect not only air pollution exposures but also other social, economic, and demographic factors that affect a population’s underlying health status and level of vulnerability, including access to medical care.

Children and the elderly are most acutely affected.

Throughout the world, children and the elderly suffer a disproportionate burden from the health impacts of air pollution. A peak in pollution-related deaths among babies in the first month of life reflects the influence of particulate matter exposure on neonatal diseases related to low birth weight and preterm birth and on lower-respiratory infections. A second, larger peak in the older age groups reflects air pollution’s contributions to lower-respiratory infections and major noncommunicable diseases that develop over time, such as ischemic heart disease, stroke, COPD, lung cancer, and type 2 diabetes.

Ambient PM2.5 and household air pollution are the largest contributors to mortality and years of health life lost across age groups. Since COPD takes years to develop and is the only health outcome included in the analysis for ozone, the effects of ozone are seen only in adults. 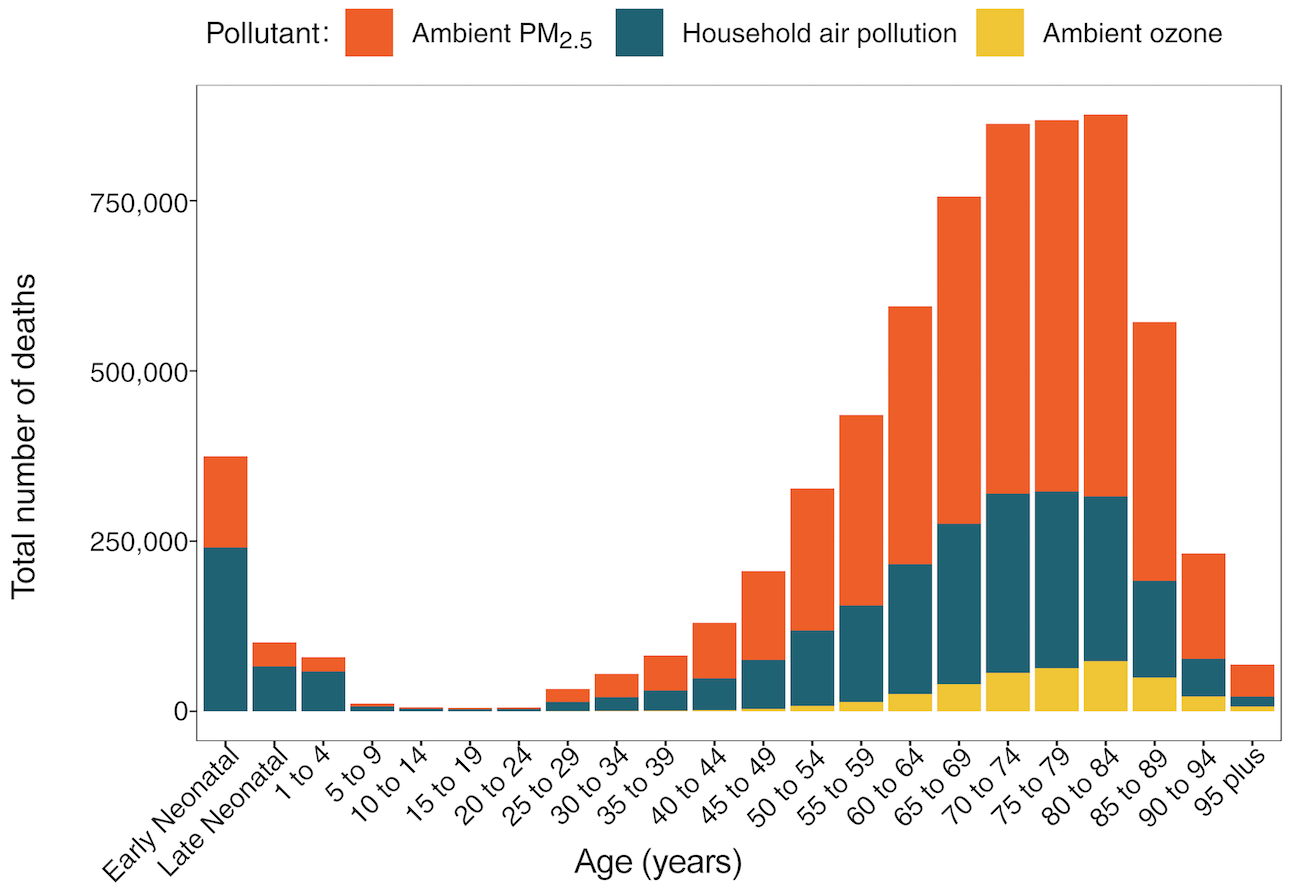 Figure Q. Distribution of global deaths in 2019 attributable to PM2.5, ozone, and household air pollution, by age (years, except early neonatal [0 to 6 days] and late neonatal [7 to 27 days]).